Upon the return of the Austrians, the institution of the Merchandise Exchange was confirmed by an imperial decree in May 1816.
The Chamber of Commerce continued to carry out the functions that had been assigned to it by the founding decrees of 1808, while the exchange's directors (sindaci di borsa)  had yet to be elected directly by the brokers. They continued to be appointed by the Chamber of Commerce, which often chose directors who were not brokers. .

In the pursuit of shared rules 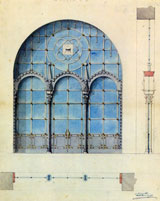 During the first decade following the Restoration, the Milan market underwent a period of low activity. In 1825, the Municipal Assembly (Congregazione municipale) closed down the premises of the Palazzo dei Giureconsulti to use them for the Piazza Mercanti elementary school “since they are not being used nowadays for the meetings they were intended for.”
In 1828, the Chamber of Commerce submitted a plan to the Austrian authorities for the organisational reform of the Milan Exchange, which was not taken up. On 29 March 1848, during the term of the temporary government, the Chamber of Commerce approved the direct election of the directors (sindaci) and in July of the same year drew up a new draft of the regulations for the Exchange.

The financial development of the Milan marketplace

Starting in the 1830s, the financial market of the Lombardy and Veneto regions began to solidify, initially driven by the development of the silk industry and silk trade, followed by the growth of other manufacturing sectors and by the birth of modern transportation and communications networks.
In 1832, a citywide paper entitled “Il termometro mercantile e d'industria” published the listings of four public debt securities that were handled by the Milan Exchange at the time; by 1841, the number of public securities tracked by the "Bollettino dell'eco della borsa” the broadsheet used by the Chamber of Commerce to publish the official prices, had risen to seven. Finally, in 1858 the first equity share, that of the Società delle strade ferrate del Lombardo-Veneto, appeared in the list alongside the eight public debt securities.