The Stock Exchange under the new Kingdom of Italy 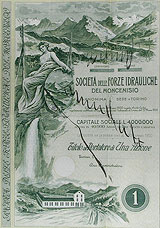 The political unification of Italy required a substantial financial commitment on the part of the new government, which resorted to a large issue of public debt securities.
During the 1870s, these securities were accompanied by the appearance of the first railway companies and countless banking companies.
Manufacturing companies, on the other hand, able to fulfil their development needs through self-financing and bank loans due to their smaller size, were not to appear on the list for a long time. It was only at the turn of the century that the country's rapid industrial growth also led manufacturers to the stock exchange to procure the financing they required.  The number of stocks listed in Milan grew from 23 to 54 between 1895 and 1900, reaching 160 in 1913.

From the Codes of Commercial Law to the Law of 1913 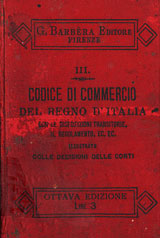 The new Code of Commercial Law of 1865 partially remedied the inadequate legislative framework that had remained virtually unchanged since the time of the Napoleonic decrees. It failed, however, to introduce specific laws on the stock exchange, which were only to be approved much later, in 1913.
The provisions that were passed in the following years (founding of the Syndicate - sindacato - and trading limit on officially listed securities) resulted in the limitation of some of the problems involving the major stock exchanges. With the 1882 Code of Commercial of Law, new regulations (dated 1883) introduced a few changes into the admission of securities and the clearing of contracts.
Because these laws did not address the main problem that affected the meetings, namely, illegal brokerage by unauthorised intermediaries, the dissatisfaction of the brokers continued to grow throughout the last quarter of the century. It was only after the international crisis of 1907 that Law 272 of 30/3/1913 unified all the rules into one text that regulated the founding of stock exchanges, vigilance over their activities, procedures for listing securities and tracking prices, privileges of the stock agents and their working methods.

The new seat and leadership of Milan

As a result of the sudden strong growth in trading, the Milan exchange had to find a new space for its meetings. The new seat in Palazzo Broggi located in Piazza Cordusio, called Piazza Ellittica at the time, opened up for trading in 1901.
During the 19th century, stock exchanges had spread throughout Italy in many mercantile centres, even in those of little importance. In any case, the main financial marketplaces were concentrated in Genoa, Milan, Turin, Florence and Rome. During the early 1900s, the financial geography underwent profound changes and while Rome took on importance to the detriment of Florence, Milan supplanted Genoa which had received a serious blow from the crisis of 1907. From that time, Milan went on to become the country's main market, partly thanks to the concentration of industrial shares.