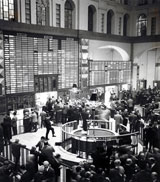 After post-war reconstruction, in a matter of a few years the Stock Exchange resumed full-scale trading and enjoyed a long expansion phase throughout the 1950s, during which share prices experienced strong growth in tandem with the general boom in the Italian economy.
The number of listed companies remained virtually the same while the insurance, financial and electrical sectors grew. Holding companies began to be listed along with operating subsidiaries controlled through cross holdings.

The Burden of Tax Laws

In 1956, the Minister of Finance, Roberto Tremelloni, introduced new tax laws that obliged stockbrokers to report daily on all forward contracts that had been settled.
The stockbrokers' protest was immediate and paralysed trading for several months. The obligation was side-stepped by introducing a form of contract based on cash with delayed clearing, which was definitively approved in 1958.

From Copying Pencils to Punch Cards 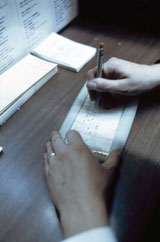 During the frenetic activity of the 1950s, “back office” work continued to be performed using manual systems that no longer kept pace with the volumes being processed.
The exchange of provisional contracts between the counterparts and verification of the contracts that were settled each day, the tracking of the prices used and the drawing up of the official lists were all done by hand, wasting enormous amounts of time. In the early 1960s, a consortium made up of some of the Milan stockbrokers formed the Data Processing Centre, which was equipped with advanced information technology, later taking the name of CEB – Centro Elettronico Borsa (Stock Exchange Electronics Centre). During the 1960s and '70s, all the stockbrokers joined the consortium, which operated according to the instructions given to it by the Stockbrokers' Executive Committee (Comitato direttivo degli agenti di cambio). In its early days, the CEB was quite small, so it was located on the trading floor in a hallway behind the main display board. During this period, the foundations were laid for the technological transformation of the market that over the course of three decades would lead to the electronisation of trading and the dematerialisation of financial transactions.