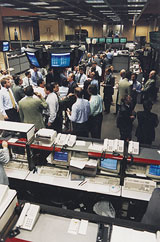 Law 1 of 2/1/1991, which came into force on 1 January 1992, launched the market into an intense period of transformation.
The Stockbrokers' Executive Committees (Comitati direttivi degli agenti di cambio) of the Italian stock exchanges were dissolved and a Stock Exchange Board (Consiglio di Borsa) was instituted in Milan with the task of representing all the members of the market (Banca d'Italia, stockbrokers, brokerage firms, banks, Chambers of commerce) and of unifying trading at a national level.
The stockbrokers lost their monopoly over stock exchange contracts while the formation of brokerage firms, authorised to act both on their own behalf and on behalf of third-parties, was provided for. Stockbrokers who were operating at the time were given the option of: creating partnerships and forming brokerage houses, joining a banking-based brokerage firm or continuing to operate as brokers. Competitions for the appointment of new agents ceased to be held and the professional category was terminated through attrition.
The law also called for stock exchanges to be concentrated in the form of virtual meetings between authorised stock dealers and brokers, rather than at a physical location.

The electronisation and dematerialisation of trading 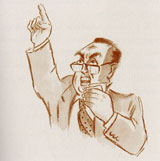 The Stock Exchange Board was given the task of completing the market reform process on an operational level as well as on an institutional one.
The process of changing from open outcry trading to the electronic platform was completed between 1992 and 1994. During the following years, the dematerialisation process also continued, resulting in the exchange of securities being reduced to simple accounting transactions between the positions of the contracting parties open at the custodian bank.
These new forms of trading opened up the possibility in their turn for more efficient techniques for integrating the international securities markets and disseminating new financial products. After the mid-1990s, attention to these issues grew and the Stock Exchange Board began to study new prospects for international convergence.

Starting in 1992, with the privatisation of state holdings, the Italian market received a vital infusion of liquidity that contributed to increasing capitalisation.
The government proceeded to place several previously unlisted state-controlled giants such as INA and ENI on the stock market and to sell major holdings in companies that were already listed, such as the main national banks (Banca Commerciale Italiana, Credito Italiano).