End of the Expansion Phase and Nationalisation of the Electricity Supply 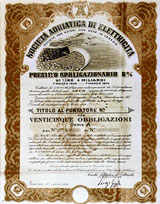 During the early years of the 1960s, the economic expansion phase began to slow down: a rise in inflation and a downward trend in the balance of payments led to a reversal in performance, while the growing intervention in the economy by the government acted as a brake on the Stock Exchange.
Fixed-income securities and asset shelters like government bonds became more attractive than the stock market. The nationalisation of the electricity industry led to the removal from the list of some of the most traded stocks; others were affected by processes of financial concentration, such as the Edison-Montecatini merger in 1966

The 1974 Law and the Formation of CONSOB

By the beginning of the 1970s, the Stock Exchange had almost completely lost its function of financing industrial growth.
Buoyed by high interest rates, savings were increasingly diverted toward serving public needs, while trading of stocks was limited to transfers of controlling interest packages and transactions of a purely speculative nature.
In response to these conditions, to remedy the crisis in the market created by the lack of transparency, Law 216 of 7/6/1974 introduced the first obligation of listed companies to divulge their financial statements and corporate information and instituted a new supervisory body: CONSOB, the public authority responsible for regulating the Italian securities market.

Milan, the Financial Capital of Italy

The 1970s were also the years when the Milan marketplace gained increasing importance in the network of Italian stock exchanges.
Banks, the driving force behind the effectiveness of the Italian stock markets, equipped themselves with instruments for centralised order management and began to direct all transactions toward a single location, in most cases to Milan. From this point on, the other new Stock Exchanges could only count on private clients and smaller local banks.